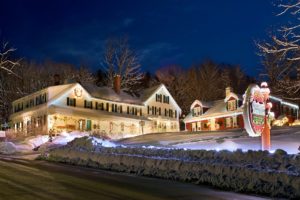 Of course, we may be somewhat impartial, but we think our home of Jackson, New Hampshire is a truly magical place. Turns out Lonely Planet agrees with us. In light of the holiday season, their recent feature highlights 10 US towns with settings akin to those you see in Hallmark Christmas movie fairytales. Cue the snow, twinkle lights, and a little romance too.

“For nearly twenty years, the Hallmark Channel has been synonymous with Christmas movies, releasing dozens of new flicks every year and running its library of over a hundred holiday films wall to wall during the Countdown to Christmas marathon. They’re popular precisely because the story lines follow a familiar formula, and offer up an aesthetic that closely adheres to a century of Hallmark greeting cards portraying winter wonderlands and cozy communities lit up with the promise of a happy holiday.

We don’t all live in New England towns where white church spires are covered in snow, or work making gingerbread for a living, or have an unexpected chance to marry the prince of tiny, relatively unknown country. But that doesn’t mean you can’t live out your own holiday fantasy by visiting one of ten towns across the United States that have big Hallmark Christmas movie vibes.”

We’re so pleased that Jackson, New Hampshire and our beloved Christmas Farm Inn and Spa made the list. “Nestled in the famous White Mountains of New Hampshire, Jackson is definitely the stuff of New England Christmas fantasies.”

Read more about us and other Hallmarkesque towns across the country in the Lonely Planet feature piece.