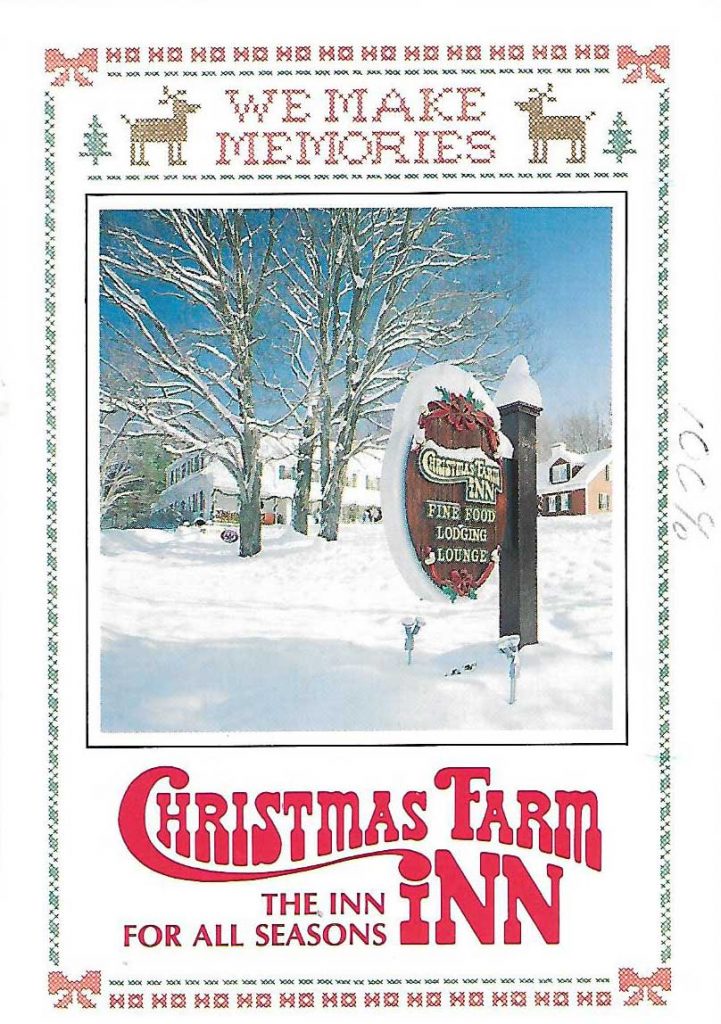 Owners, Gary and Sandra Plourde announced that 2016 marks the 70th anniversary of the iconic inn and resort, the Christmas Farm Inn & Spa in Jackson, NH.

Dick Welch bought the Christmas Farm in 1946 with the vision of operating it as an inn to take on lodgers visiting the White Mountains.  It had been named Christmas Farm by the lady they bought it from.  She had received the farm as a Christmas gift from her father in 1941 and thought it was a great name for the farm.  Prior to that, it was called ‘Perkins Farm’ and ‘Perkin’s Cottages’ from about 1857 to 1941, and ‘Pinkham Farm before that. Capt. Joseph Pinkham bought the land in 1787, which was originally part of the Gilman Location grant.  The historic property, with its memorable Christmas Farm name, was well known in the area. Dick Welch decided to keep the name and called his new business the Christmas Farm Inn.   He operated the inn with his first wife Doris until they retired and sold the inn to Jim Powers in 1971.

During this time they built a successful business providing accommodation and hospitality to the growing number of travelers empowered by their own automobiles.  As business grew, they added an outdoor pool, expanded the kitchen, bakery and dining room and added new rooms to the inn.

Jim Powers owned the inn from 1971 and sold it to Bill and Sydna Zellif in 1976. Powers was instrumental in building interest for cross country skiing in Jackson.  What is now known as Jackson Ski Touring Foundation (JXC) was founded in the front living room of the Christmas Farm Inn in 1972 and Powers became its first President.  Jackson Ski Touring Foundation is now a community based nonprofit 501(c)(3) organization chartered to maintain cross country ski and snowshoe trails in and around the village of Jackson, NH. JSTF maintains 150 km of trails considered the finest cross-country ski trails in the Eastern United States, and 40 km of snow shoeing trails.

Bill and Sydna Zellif bought the Christmas Farm Inn in 1976 after Bill saw the property advertised ‘For Sale’ in a national paper.  They owned the property from 1976 to 2000, raised their family there and made the Christmas Farm Inn a household name in New England and beyond.  In 1978 they renovated the historic barn, creating 4 suites and an event room which now hosts many social and business events.  During the 80’s they built 5 new cottages on the estate and upgraded rooms in the Main Inn and Salt Box buildings.  During the 80’s and 90’s, the Christmas Farm Inn was renowned for great food, service and hospitality.  The Zeliffs were both active in community organizations, initiatives and events.  Among other things, Bill Zeliff founded the Memorial Hospital Golf Tournament, became President of the New Hampshire Lodging and Restaurant Association and was elected to the United States Congress 1991-1997.  The Christmas Farm Inn became a center of political activity with many notable politicians and political families frequenting the inn at the time.  The Zeliffs sold the Christmas Farm Inn to George and Michael Tolley in 1998.

In 2010, the Tolleys partnered with Gary and Sandra Plourde through a creative joint-venture-agreement to transition the property.  The Plourdes had many years of experience working internationally in the hotel and tourism industry and were able to more than double the occupancy and revenue of the inn, effectively bringing it out of the great recession. In 2013 the Plourdes purchased all interests in the business and continue to operate it successfully today.

The Christmas Farm Inn & Spa now consists of 16 Suites, 7 Cottages, 18 Traditional inn rooms, a bistro style casual restaurant, country pub, indoor pool & fitness center, outdoor pool and Aveda Spa, with 7 treatment rooms, steam room and relaxation lounge.  They regularly host weddings and events in the historic barn or banquet facilities.  As one of the largest employers in the area, many people in the area have worked there or even started their career there.

Gary Plourde said, “We are thrilled to be part of the 70 year history of the Christmas Farm Inn and +200 years for the farm.  We see ourselves as caretakers maintaining the history and reputation of this historic landmark.  It will be a labor of love until it is again passed on to the next generation. It is unique property that attracts guest from all over the world.”

Plourde said that, other than maintaining and updating the existing facilities, they have no plans for further expansion.  “Our guests love coming here and many generations are part of the history.  We want to keep that going!” Plourde said that there will be a number of events to celebrate the 70th anniversary of the inn.